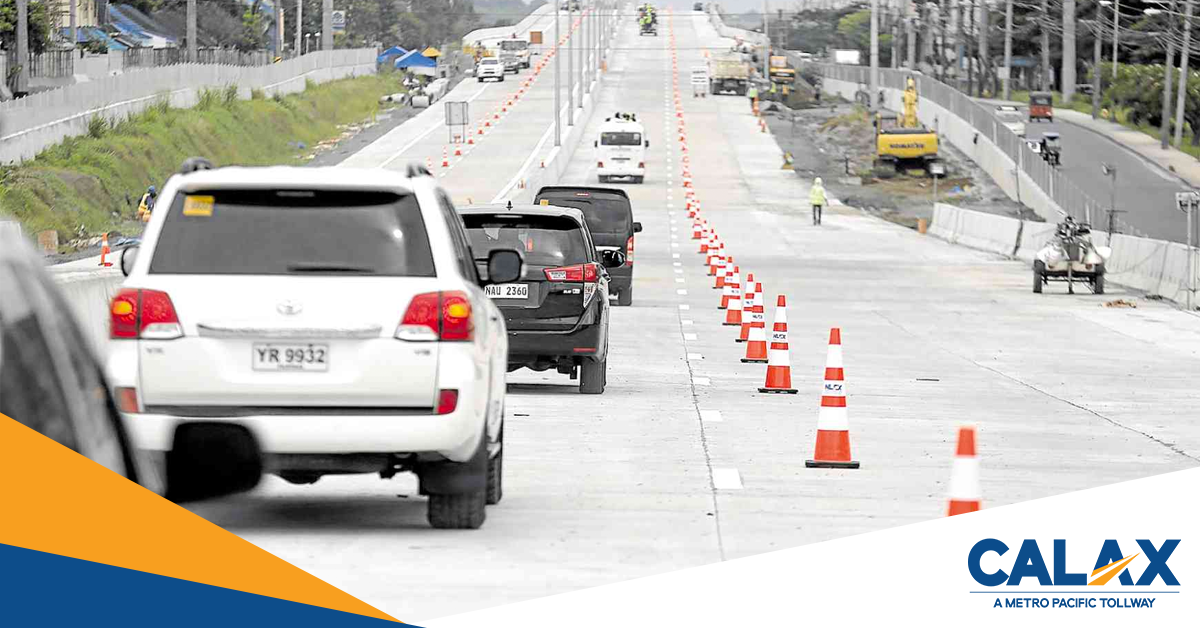 By: Maricar Cinco (Philippine Daily Inquirer), as seen on https://newsinfo.inquirer.net/1185689/cavite-laguna-expressway-seen-to-ease-southern-luzon-traffic, 04:19 AM November 05, 2019

SANTA ROSA CITY, Laguna, Philippines — Traffic-weary motorists from the southern section of Metro Manila and from provinces in Southern Luzon have found relief with the opening of a portion of the Cavite-Laguna Expressway (Calax) last week.

On Monday, an official of tollway operator, Metro Pacific Tollways Corp. (MPTC), said a daily average of 3,000 vehicles had used the new expressway during the All Saints’ Day and All Souls’ Day holidays.

The Department of Public Works and Highways (DPWH) and MPTC opened the first 10-kilometer stretch of Calax — from Mamplasan Exit in Biñan City, Laguna, to the Santa Rosa-Tagaytay Interchange or in the boundary of Sta. Rosa City, Laguna, and Silang, Cavite — on Oct. 30 in anticipation of the influx of vehicles traveling during that long weekend.

“That was just for the [partial opening]. How much more once we open the whole stretch?” Arlette Capistrano, MPTC assistant vice president for communication, said in a telephone interview on Monday.

Once completed, the 45-km expressway would link the provinces of Cavite and Laguna
—from the Cavite Expressway (Cavitex) in Kawit, Cavite, to the South Luzon Expressway (SLEx). It was designed to have eight interchanges or exit points.

But Public Works Secretary Mark Villar said the DPWH was expecting the number of Calax users to grow to 10,000 vehicles daily and decongest the Sta.Rosa-Tagaytay Road, the most common route of motorists to the tourist city of Tagaytay in Cavite.

Villar said Calax could also cut down by half the normal one-hour travel time between Cavitex and SLEx.

“Infrastructure [projects] really have its challenges … The thrust [of Build, Build, Build] is the focus on implementing and delivering these projects. The fact that we have opened [Calax] in time for ‘undas’ shows our commitment [to the administration’s program],” Villar said in an interview during the road opening.

He also apologized to the public for the “small inconveniences” caused by the road projects, which he said would eventually result in “long-term benefits.”

The DPWH targets to complete the remaining 35 km or the Cavite phase of Calax before President Duterte’s term ends in 2022.

MPTC will collect toll on the opened sub-sections when substantial completions has been achieved.