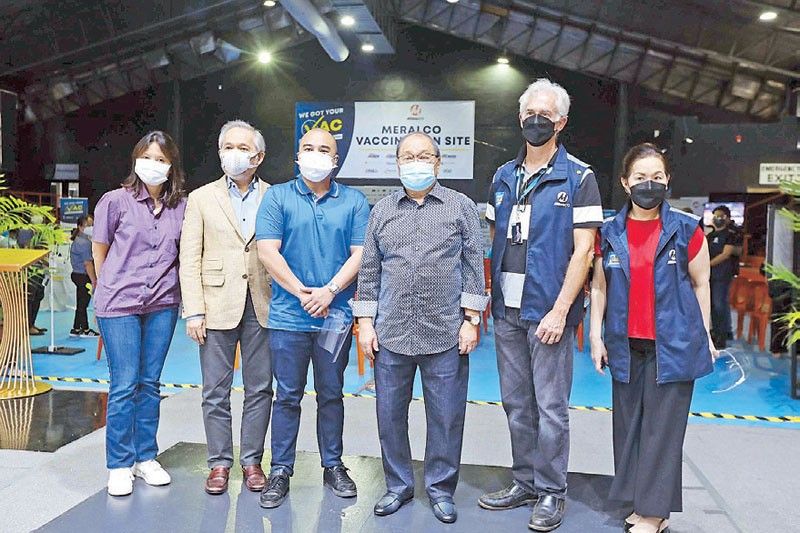 MANILA, Philippines — The MVP Group, the conglomerate chaired by tycoon Manuel V. Pangilinan, kicked off yesterday its vaccination program for its 60,000 employees, moving the country a step closer toward herd immunity.

“We want to remind ourselves that the virus will not disappear so we need to do this. I hope all our employees will register and get vaccinated,” Pangilinan said at the launch of the program inside the Manila Electric Co. compound in Ortigas.

Meralco president and CEO Ray Espinosa said these efforts are meant to “keep the lights on” in this time of pandemic.

“All of this would not have come to fruition without the vision of our beloved chairman,” Espinosa said.

Pangilinan paid tribute to the employees of the MVP Group, especially those in essential services.

“Our vaccinees, through the essential services we offer group wide – from hospitals, telecommunications and digital services, electricity, water, tollways and road infrastructure, media and more – have been and will continue to be the key source of stability as the Philippines emerges from this global crisis,” Pangilinan also said.

Led by the MVP Group Vaccine Task Force, the first tranche of company-procured Moderna doses was administered to the Group’s first batch of employees at the Meralco compound in Pasig City.

The launch site is one of several facilities the Group has identified in administering all the vaccinations in National Capital Region (NCR) Plus. Among those to be activated by the second week of July are PLDT Sta. Ana in Manila, Smart Tower in Makati, Maynilad Balara in Quezon City and NLEX Sta. Rita in Bulacan.

Each pilot site, to be manned mainly by frontliners from the MVP Group’s hospital arm Metro Pacific Hospitals Holdings Inc. (MPHHI), is expected to vaccinate an average of 700 up to 1,350 individuals per day.

For areas outside NCR Plus, the Vaccine Task Force will use a combination of MPHHI’s private health care network – the Philippines’ largest – as well as other MVP Group-wide facilities and selected malls across the country.

The rollout will take place up to December, depending mainly on the arrival of Moderna and AstraZeneca vaccines, Pangilinan said.

The Group previously announced that its vaccine task force ordered vaccines from Moderna and AstraZeneca enough for more than 300,000 employees, dependents and household members, as well the extended workforce.

“Any talk about ending this pandemic begins with a fundamental imperative: the successful rollout of ethically procured, safe and effective vaccines to a significant majority of our people,” Pangilinan added.

“Inoculating the population from the virus does not just reduce the number of infections and deaths but minimizes the possibility of new mutations and variants, taking us a step closer towards the paramount goal of herd immunity,” he said.

Prior to the pilot vaccination, the MVP Group also launched a group-wide immunization education campaign to encourage employees to get inoculated.

Earlier this year, the conglomerate helped ramp up LGU vaccinations by offering the expertise and available capacity of its largest NCR hospitals, where up to 98 percent of frontliners were vaccinated as early as March 2021.

It also showed solidarity with the national government and other members of the private sector with the ceremonial start of the vaccination rollout for the A4 sector last month. This was in partnership with the National Task Force against COVID-19, Taskforce T3 (Test, Trace and Treat) and the Department of Health.

Villar satisfied with progress of CCLEX in Cebu, now 80% complete
Scroll to top