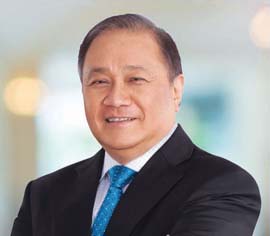 Manuel V. Pangilinan, 74, sits at the helm of Metro Pacific Investments Corporation as its Chairman.

In 1981, he founded First Pacific in the Philippines—from which MPIC traces its roots—and currently serves as its Managing Director and Chief Executive Officer. 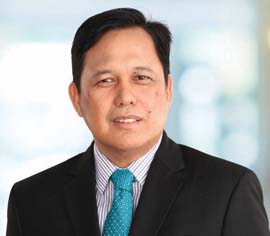 Before moving up to the CEO post of MPTC, Mr. Franco serverd as President and CEO of Manila North Tollways Corp. (now NLEX Corp.), the concession company for NLEX, SCTEX and NLEX Connector.

Before joining MNTC in April 2003, Mr. Franco spent 20 years with JPMorgan Chase Bank. He was Vice President for Investment Banking where he assisted several Philippine companies in raising funds from the international loan and capital markets and had been involved in originating and executing a number of mergers and acquisitions, equity capital markets and loan and bond restructuring transactions.

Mr. Franco is a graduate of the Ateneo de Manila University with a degree in Management Engineering and a Masters in Business Administration. 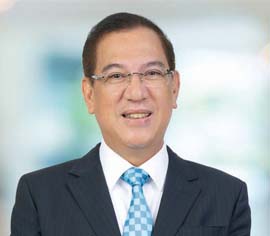 He joined the MPIC Group (which was then called Metro Pacific Corporation or MPC) in 1995 as Treasury Vice President of the Fort Bonifacio Development Corporation (then a subsidiary of MPC). He was later appointed as its Chief Finance Officer in 2000. In 2001, he assumed more responsibility for the company as he concurrently served as Vice President and Chief Finance Officer of MPC.

Prior to joining the MPIC Group, he built himself a solid reputation in foreign banking institutions as Vice President of the Equitable Banking Corporation and Director for Investment Banking of the First National Bank of Boston.

For five consecutive years from 2012-2016, he was conferred the Best CEO for Investor Relations by Corporate Governance Asia.

Mr. Lim earned his Bachelor of Arts degree in Philosophy from Ateneo de Manila University and his Master of Business Administration degree from the Asian Institute of Management. 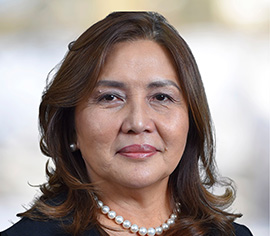 She won the PAASCU James J. Meany Award in 2009, the PICPA Leadership Award in 2005 and the Outstanding PERAA Member (TOPM) of the Private Education Retirement Annuity Association (Teaching Category, Level A) in 2004.

As President of Holy Angel University and concurrently Dean of its Graduate School since 2006, as well as Dean of its College of Business and Accountancy for 22 years, Dr. Villanueva played a key role in transforming the University into the biggest and most prestigious private school in Central Luzon. Today, Holy Angel University is the only school in the Philippines accredited by the International Assembly for Collegiate Business Education (IACBE), and one of very few tertiary schools granted autonomous status by the Commission on Higher Education (CHED) and Level III accredited status by the Philippine Association of Accredited Schools, Colleges and Universities (PAASCU).

Married to Atty. Cesar L. Villanueva, former dean of the Ateneo Law School, with whom she has three children (Gabby, Tessa and Maria), Dr. Villanueva hails from Angeles City, Pampanga. She obtained the degree Bachelor of Science in Accounting at the then Holy Angel College, Master in Business Management at the Ateneo de Manila University and Doctor in Business Administration at the De La Salle University. 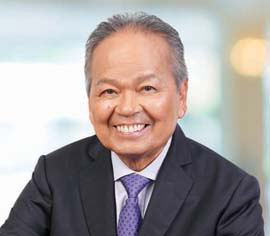 In 1995, he was appointed Justice of the Supreme Court, and in 2005, Chief Justice of the Supreme Court of the Philippines. On his retirement on December 7, 2006, his colleagues acclaimed him unanimously as the Renaissance Jurist of the 21st Century. Aside from being a prodigious decision writer, he also authored eleven books while serving on the highest court of the land. His judicial philosophy is Liberty and Prosperity Under the Rule of Law. A much sought-after independent director and adviser of business firms, he also writes a column in the Philippine Daily Inquirer. Prior to entering public service, Chief Justice Panganiban was a prominent practicing lawyer, law professor, business entrepreneur, civic leader and Catholic lay worker. He was the only Filipino appointed by the late Pope John Paul II to be a member of the Vatican-based Pontifical Council for the Laity for the 199th 1996-2001 term. 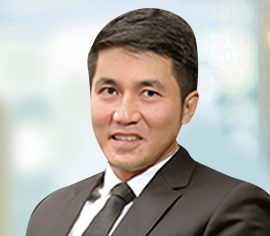 He has more than 20 years of vast experience in finance, accounting and treasury management for having worked with the Metro Pacific Group. As Treasury manager in 2000, Mr. Lizo successfully handled the retirement of its seven-year debt reduction program that geared the company into reorganization and recapitalization. After MPIC was established in 2006, Mr. Lizo was appointed as Controller and Vice President for Treasury of MPIC to oversee its strategic business and financial planning process. In addition, he also handled the administration, finance, credit and risk management, budget and accounting departments of the company. Mr. Lizo became a Director of MPTC in 2007.

Mr. Lizo is a BS Accounting graduate of De La Salle University and a Certified Public Accountant. He finished the Executive Management Course at the Wharton School of the University of Pennsylvania USA in October 2015. 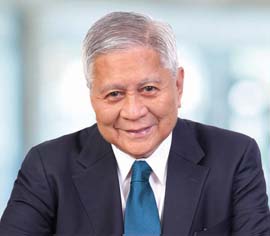 Ambassador Albert F. del Rosario was the former Secretary of Foreign Affairs of the Philippines from February 2011 to March 2016.  He also served as Philippine Ambassador to the United States of America from October 2001 to 2006.  Prior to entering public service, he was on the Board of Directors of over 50 firms.  His business career for over four decades has spanned the insurance, banking, real estate, shipping, telecommunications, advertising, consumer products, retail, pharmaceutical, and food industries.

Ambassador del Rosario received numerous awards and recognition for his valuable contributions to the Philippines and abroad.  In September 2004, Ambassador del Rosario was conferred the Order of Sikatuna, Rank of Datu, by H.E. President Gloria Macapagal-Arroyo for his outstanding efforts in promoting foreign relations for the Philippines.  He was a recipient of the EDSA II Presidential Heroes Award in recognition of his work in fostering Philippine democracy in 2001 and the Philippine Army Award from H.E. President Corazon Aquino for his accomplishments as Chairman of the Makati Foundation for Education in 1991.  He was awarded as 2013 Professional Chair for Public Service and Governance by the Ateneo School of Government and the Metrobank Foundation.  He was elevated to the Xavier Hall of Fame in New York in 2006.  Ambassador del Rosario received the AIM Washington Sycip Distinguished Management Leadership Award in 2011 and Doctor of Laws (Honoris Causa) for principled commitment to democracy, integrity and the rule of law both at home and around the globe conferred by the College of Mount Saint Vincent, New York City in September 2015.  He was conferred the Order of Lakandula with a Rank of Grand Cross (Bayani) for acting as Co-Chair of the 2015 Asia Pacific Economic Cooperation Summit in December 2015.

Ambassador del Rosario graduated from New York University with a Bachelor of Science Degree in Economics. 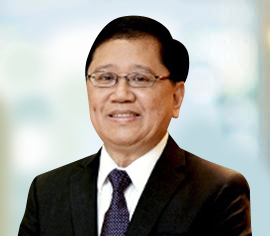 He has close to 23 years of involvement in the development, construction and modernization of the NLEX Project since 1995. His areas of expertise are in developing and constructing Tollroad Infrastructure Projects, as well as in overseeing their Operation and Maintenance. Among his recent involvements include the construction of the extension of the CAVITEX C5 South Link Project and the Cavite Laguna Expressway (CALAX). In terms of developing new projects, Mr. Bautista has led the team that recently acquired the Original Proponent Status for the Cavite-Tagaytay-Batangas Expressway (CTBEX).

Mr. Bautista is among the Top 20 examinees of the Professional Regulations Commission in 1981. He is a member of the Philippine Institute of Civil Engineers. 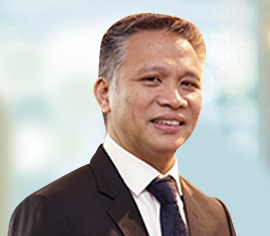 Mr. Roberto V. Bontia is the President and General Manager of Metro Pacific Tollways South Corporation and its two main expressway companies towards the south — Cavitex Infrastructure Corp. (CIC) and MPCALA Holdings Corp. Mr. Bontia has also served as Director of NLEX Corp. since November 2016. He joined Tollways Management Corporation (TMC) in 2005, shortly after the start of North Luzon Expressway’s commercial operations. He headed the Toll Operations and Corporate Communications divisions of TMC and in December 2015, was named its President and CEO.

Prior to joining the Tollways Group, Mr. Bontia had 14 years of experience working for Nestle on various positions in the technical division covering industrial performance, manufacturing operations, and supply chain management. He had assignments in the Philippines, Switzerland, United States, Australia, and Mexico. Mr. Bontia also worked as a Technical Staff Consultant in the Change Management Services Division of SGV Consulting, specializing in organization/human resource management studies and operations improvement program.

Mr. Bontia obtained his Bachelor of Science in Industrial Engineering Degree at the University of the Philippines in 1988. 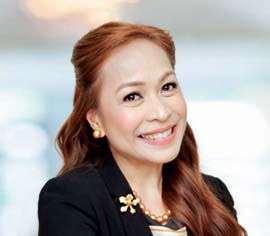 Mrs. Cabal-Revilla earned her Bachelor of Science in Accountancy from De La Salle University and her Master of Business Management from Asian Institute of Management. She also attended the Stanford Executive Program of Stanford Graduate School of Business. 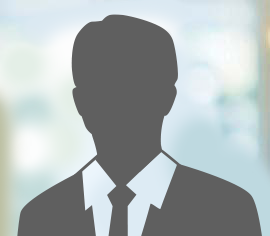 Atty. Alex Erlito S. Fider graduated from the University of the Philippines with degrees in Economics and Law. He was admitted to the Philippine Bar in 1985 and has been in the practice of law since then. He undertook specialized courses in strategic business economics in the Philippines and corporate governance in Australia. His legal experience spans 30 years of involvement in corporate transactions and projects that involved legal counseling on Philippine law, including legal advice on the appropriate transaction structure, crafting of documents, legal due diligence audit, and managing corporate legal work in corporate acquisitions and investments, joint ventures, privatizations, corporate finance, divestments and restructuring. His legal work extends to a wide array of corporate and financial matters to companies involved in public infrastructure, water and power utilities, telecommunications, mass media, banking and finance, and real estate development. He is a specialist in the various fields of commercial, civil, telecommunications and public utilities law. Atty. Fider is a director and corporate secretary of several Philippine companies, some of which are publicly-listed companies. He is actively involved in the Financial Executives Institute of the Philippines (FINEX) and Institute of Corporate Directors of which he is a Fellow. He has served as resource person on corporate governance, taxation and asset-backed securitization. He is one of the name Partners of Picazo Buyco Tan Fider & Santos, one of the top law firms in the Philippines, and formerly served as its Managing Partner.