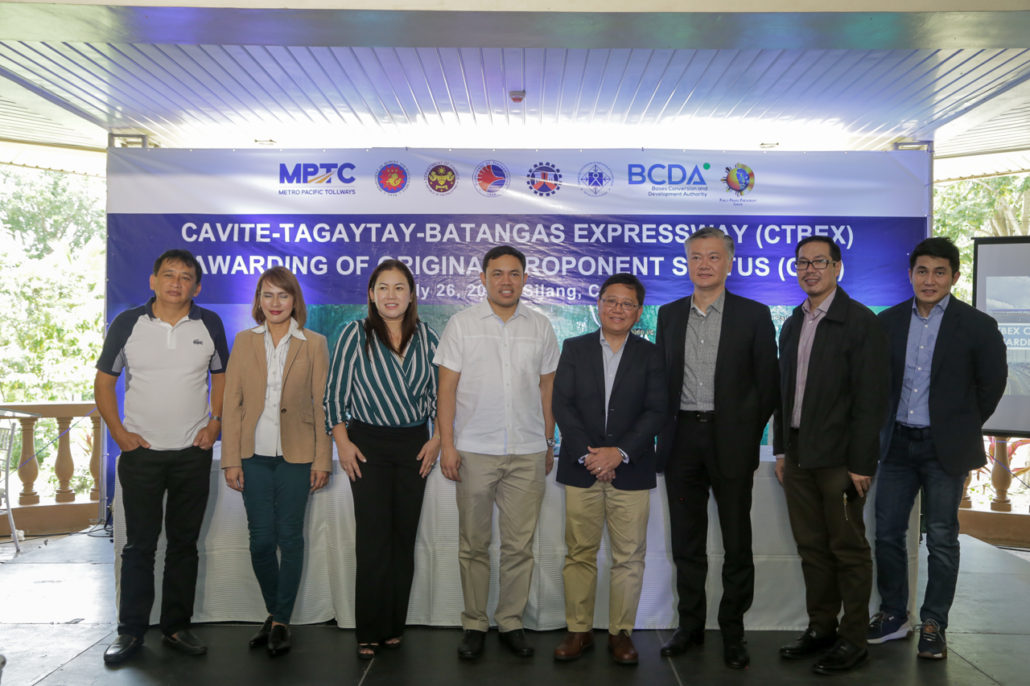 Silang, Cavite – The Department of Public Works and Highways (DPWH) Secretary Mark Villar awarded the Original Proponent Status of the Cavite-Tagaytay-Batangas (CTBEX) to the Metro Pacific Tollways South, a business unit of Metro Pacific Tollways Corporation, a subsidiary of the Metro Pacific Investments Corporation. It was in July of 2017 that MPT South submitted the proposal to DPWH with the objective of reducing travel time of motorists going to Tagaytay and Nasugbu from Manila and vice versa. CTBEX will connect seamlessly with the Cavite-Laguna and Cavitex Expressways of MPTC and will reduce vehicle operating costs, improve communities through employment and income growth from land development and improve urban setting, as well as increase tourist visits to the municipalities which will be traversed by the alignment.

“We are glad to award the original proponent status to MPT South, their commitment to nation-building is commendable. CTBEX will decongest approximately 23,000 vehicles daily from existing thoroughfares. Moreover, with CTBEX, travel will be seamless via MPT South’s network of tollroads. Mapping out the routes, access to region 4A may start from C5-Southlink in Taguig connecting to CAVITEX, CALAEX then CTBEX and from Manila via CAVITEX, CALAEX then CTBEX. Our doors are open to any developer with viable proposals, after all, now is the golden age of infrastructure as we find more routes that pave the progress of our Nation.” Said Secretary Mark Villar.

The project is expected to provide congestion relief to Aguinaldo Highway and Tagaytay Nasugbu road, where traffic is expected to grow by 4% annually over the next decade. Travel time will be shortened in 2 major routes namely Governor’s Drive to Nasugbu, where the usual 1 hour and 42 mins will be reduced to 44 mins, equivalent to 56% time savings, and the Sta. Rosa to Tagaytay Route, where the usual travel of 2 hours will be reduced to 46 minutes, equivalent to 62% time savings. Also, vehicle operating cost for Class 1 vehicles will decrease by 12% on opening year due to the shortened travel time.
The 50.42 km CTBEX that will connect from the West of Silang East Interchange of the Cavite Laguna Expressway (CALAEX) will pass through Silang, Pook, Amadeo, Tagaytay, Mendez, Alfonso, Magallanes, Tuy and Nasugbu. It will have 8 main interchanges (Silang East, Pook,

Aguinaldo, Amadeo, Mendez, Alfonso, Magallanes, Nasugbu), and two spur roads (Tagaytay and Tuy), and is estimated to cost P22 Billion including right of way.
“Our objective in proposing this road is connectivity, providing thousands of motorists an alternative route to and from region 4A. It is a sensible connection to CALAEX, as both alignments will decongest traffic in Cavite, Laguna and Batangas. More so, it will spur jobs generation brought about by tourism, trade and commerce. This awarding of the Original Proponent status of CTBEX is just the beginning, we are cognizant that this proposal will still be subject to NEDA approval, successful negotiation with DPWH on the terms of the concession and lastly, a Swiss challenge; all of which should be completed by the 2nd quarter of 2019, and subject to the acquisition of the right of way, 2020 is the target date of construction ” said Luigi Bautista, President and CEO of Metro Pacific Tollways South. “Once completed, CTBEX will be the preferred route for motorists going to Tagaytay and Nasugbu from Manila and vice versa as this will seamlessly connect to CALAEX and CAVITEX”, added Mr. Bautista.

MPT South Corporation is currently constructing the Cavite Laguna Expressway which will connect to Cavitex and the C5-Southlink that will enable transfers from Laguna, Cavite, Manila, Las Piñas, Parañaque and Taguig to be seamless.

For more inquiries about this Press Release please contact:

“This is very important to us. In the Philippines, it is our first expressway project outside of Luzon. Before, all of our projects were in Luzon, and now we’re expanding to Visayas, and then hopefully will lead to Mindanao as well,” MPTC President and Chief Executive Officer Rodrigo Franco told reporters in a chance interview.

Franco made the statement on Thursday during the launch of the 8.5-kilometer CCLEX project, which is being undertaken by subsidiary Cebu Cordova Link Expressway Corporation (CCLEC).

MPTC is the holding company of the Luzon-based North Luzon Expressway (NLEX), Subic-Clark-Tarlac Expressway (SCTEX) and the Manila-Cavite Expressway (CAVITEX).

“We’re looking at the projects of the national government and see, because they made some announcements that they would be constructing roads and then bidding out the O&M (operations and maintenance). Those might be of interest,” Franco said, referring to possible projects in Mindanao.

The CCLEX project is a public-private partnership of CCLEC with the local government units of Cebu. The contractor of the project is the Cebu Link Joint Venture, a consortium of Spain-based Acciona Construccion S.A and Philippine-based First Balfour Inc. and D.M. Consunji Inc.

“Total project cost, P26 billion to P29 billion,” Franco said. The expressway, which will link mainland Cebu to Mactan via Cebu City and Cordova municipality, is expected to reduce congestion in the involved areas, thus spurring economic growth in Cebu.

“We’re expecting traffic initially of around 40,000 vehicles per day,” he added, noting that the project is expected to be completed in 2021. Toll fee will be around P89, according to Franco.

He also said that there might be upcoming MPTC projects in Cebu following the CCLEX as “our sister companies are also exploring other opportunities here.”

CCLEX is also known as the third bridge connecting mainland Cebu to Mactan. Public Works and Highways Secretary Mark Villar said that the government is looking at the possibility of constructing a fourth bridge, as advised by the Japan International Cooperation Agency.

“Mayroon kaming ginagawang plano sa (We are making plans for a) fourth bridge. We are hoping to start pag natapos na yung ginagawa ng JICA (once the one that is being built by JICA is completed). We are hoping we can finish [the]engineering design and feasibility [study]this year, para next year makapagsimula na [so that next year we can already start],” Villar said.

Prospects are high for the third-class municipality of Cordova as construction of the third bridge connecting mainland Cebu to Mactan Island starts.

Land value is expected to increase as more investors are seen to consider the town as an investment destination.

For property management and research firm Colliers, the Cebu – Cordova Link Expressway (CCLEX) project should beckon property developers, both local and national, to pursue development projects in the town which is on the same island as the Mactan Cebu International Airport (MCIA).

For developers, our recommendation will be to look at the land bank within Cordova that they could acquire as early as now. If they don’t have the current land bank, they could partner with local developers,” said Colliers’ Research Manager Joey Bondoc, in an interview.

Since Cordova is on Mactan Island, Colliers suggests that developers look at leisure-oriented estates and townships to be built in the town in order to capture the expected increase in the number of tourists coming to Cebu with the opening of MCIA’s Terminal 2 just last July 1.

The alternative link provided by CCLEX, which removes the need to pass through Mandaue City when coming from Mactan going to Cebu City, will make Cordova town attractive to investors, Bondoc added.

According to Bondoc, bigger national developers could bring in their expertise in developing large expanses of land and partner with local developers and homegrown brands in pursuing projects in Cordova.

“The CCLEX is one of the projects that we mentioned that will complement the recently completed Terminal 1 of the MCIA. Since it’s part of Mactan, it will boost not just Lapu-Lapu City but also Cordova,” he said.

Last Thursday, the civil works contractor of the project and CCLEC officials started with the ceremonial piling works for the project.

The civil works contractor of the project is the Cebu Link Joint Venture (CLJV), a consortium of Spain-based Acciona Construccion S.A., and Philippine-based First Balfour Inc. and D.M. Consunji Inc.

Providing inter-island connectivity, which helps decongest traffic going to and from Mactan Island is also a contributor of growth in economic activities.

“This is really a very important infrastructure that will bring about economic development not only in the two local government units but the entire Province of Cebu and the entire region of Central Visayas,” Carreon said.

With this is an expected offshoot which is the increase in the value of land and the selling prices of these properties.

While this may contribute to a higher cost of doing business for investors wanting to go to Cordova, Carreon said this is negated by the economic benefits that can be derived from doing so.

CCLEC President and General Manager Allan Alfon said that the CCLEX project would transform Cordova into an “investors’ paradise.”

In fact, he said, he’s heard several investors had already expressed interest in setting up shop in Cordova including a big developer of industrial estates that would want to locate in the town and introduce multi-national locators there.

He said that there are also some real estate developers, both local and from Manila, that are looking for properties to buy in Cordova.

He said these developers are interested in putting up residential condominiums, horizontal developments, and even commercial and leisure developments like hotels.

In order to prepare for this economic boom, the local government of Cordova has also started pursuing projects to improve their town as early as now.

Cordova Mayor Mary Therese Sitoy-Cho said they had already started talking with the Department of Public Works and Highways (DPWH) in improving road networks in the town through road widening and road concreting projects.

They have also started implementing a traffic code in the town.