As seen on https://manilastandard.net/news/national/327709/mptc-invests-p120b-for-new-expressways.html?fbclid=IwAR21PZBq3N6TG-7EUuF59NUJf9c77c29Pt5UHCRt8lc_UEAflfIef3wCDOA, by: Manila Standard, July 03, 2020

“We have resumed full-blast construction of our big ticket expressway projects in the country,” said Manuel Pangilinan, MPTC chairman, “responding to the call of the President to accelerate economic recovery via the government’s ‘Build Build Build’ program.” 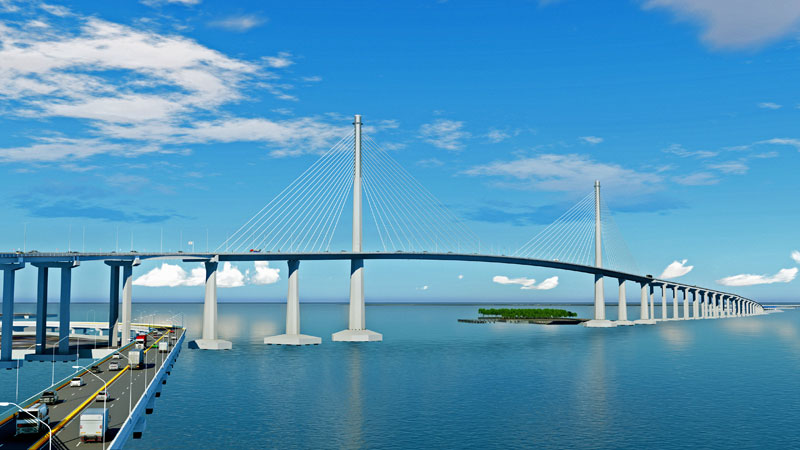 ENGINEERING MARVEL. An architect’s rendering of the Cebu Cordova Expressway, an 8.5 km bridge spanning the Mactan Channel to link Cebu and Cordova promises to be another engineering marvel when completed as it features a 600-meter cable stayed iconic bridge, according to MPTC chief Franco.

Speaking online recently to reporters on the eve of the completion of the latest elevated section of the NLEX Harbor Link along CAMANAVA area, the MPTC chairman declared once again the firm’s continuing investment in the Group’s lengthening network of expressways in the country.

Pangilinan has cited the huge impact of infrastructure building on the country’s economic recovery. He pointed out that “restarting construction projects has a huge multiplier effect on the economy, notably in generating jobs.”

Franco pointed out that expanding the country’s expressway network enables faster and easier mobility for the people and supports the unhampered flow of goods and services.

Franco disclosed that the Tollways Group has re-mobilized its contractors (observing IATF COVID-19 protocols), paving the way for the resumption of construction activities in project areas in Central Luzon, Metro Manila, South Luzon and the Visayas, particularly Cebu.

MPTC has identified four priority construction areas this year.
In northern Metro Manila and Central Luzon, MPTC is constructing three projects this year along the North Luzon Expressway corridor, including the NLEX Connector, with a combined length of 19 kilometers.

These NLEX projects include the recently opened Harbor Link C3 to R10/Mel Lopez Boulevard in the CAMANAVA area, plus the ongoing 8-km. elevated NLEX Connector Road that is being built over the PNR railroad line, with a project cost of P19.59 billion.

NLEX Corporation is also constructing a new 8-km. carriageway at the Subic Freeport Expressway, including a new tunnel and two bridges. With a project cost of P2.36 billion, the expanded expressway will be opened to traffic before the end of 2020.

MPTC’s ongoing construction projects south of Metro Manila are being undertaken inside the Cavite Expressway, valued at P15.20 billion, with a combined length of 6.75 kilometers;

In addition, two major sections of the C5 South Link Expressway, along the Paranaque-Las Pinas-Taguig City corridor, will start construction this year. These are Subsection 3A-2 between Merville and Sucat (2.10 kms., costing about P2.1 billion) and the new Segment 2 expressway between the future Sucat Interchange and Paranaque toll plaza (1.82 kms., costing about P6.2 billion).
“These new CAVITEX road expansion projects,” Franco said, “respond to the needs of the growing number of commuters beset by daily traffic gridlocks, as we provide them hassle-free alternatives at the southern part of suburban Metro Manila.”

Moreover, construction projects in choice sections of the Cavite-Laguna Expressway are going on. The 44-km. CALAX expressway network has a total project cost of P52.48 billion.

The first 10-km. section between SLEX Mamplasan interchange and Sta. Rosa City opened last year. The new expressway has become a popular alternative for commuters in the traffic-choked corridor that leads to Tagaytay City.

Meanwhile, right-of-way acquisition activities are being accelerated by MPTC, together with the Department of Public Works and Highways to accelerate construction initiatives at the remaining CALAX sections.

In the Visayas, construction is underway on the Cebu Cordova Link Expressway, an 8.5-kilometer bridge spanning the Mactan Channel to link Cebu City and Cordova in Mactan. It features a 600-meter cable-stayed iconic bridge that stands as an “engineering marvel,” according to MPTC Chief Franco.
At this writing, the CCLEX project is 40% complete. “Upon its completion in 2021, we expect to bring back the dramatic economic boom in Cebu province – the renowned “Ceeboom” – that vastly stimulated socio-economic expansion in the Queen City of the South,” Franco said.

MPTC wants cashless transaction in all its expressways

Use of RFIDs urged at toll plazas
Scroll to top