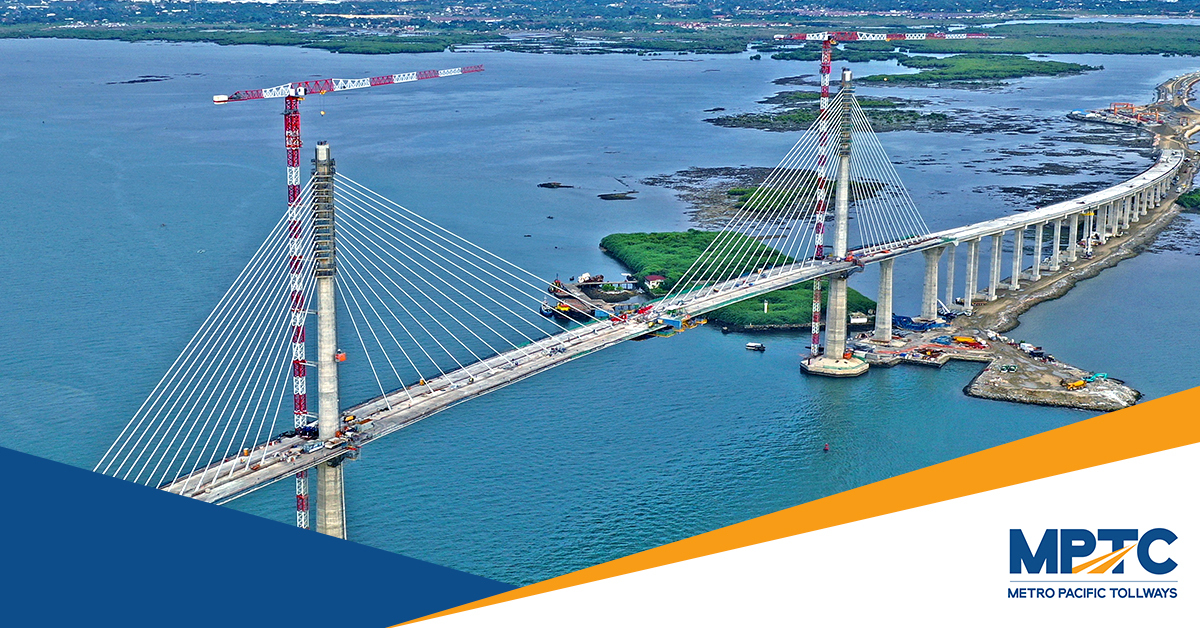 A major construction milestone was reached by the Cebu-Cordova Link Expressway (CCLEX) project, when the final main bridge has been cast in concrete, concluding a complex project covering more than three years of non-stop construction, even rising above unprecedented challenges brought mainly by a pandemic.

“Today, we have achieved a major construction feat, when the two-meter gap that had separated main bridge deck of Tower 1 from the bridge deck of Tower 2 became one; thanks to a special joint concreting engineering procedure done over the waters of the Mactan Channel, and linking two economies with a lot of promise – Cebu City and the municipality of Cordova,” said MPTC President Rodrigo E. Franco, who was in Cebu to witness the breakthrough event.

The main bridge deck hovers 51 meters above the Mactan Channel.

“We have finally reached the epic milestone of the CCLEX construction project, which truly lives up to the expressed view of builders and development leaders that CCLEX is truly an ‘engineering marvel,” Franco declared. “It gives me and my corporate and government colleagues a deep sense of pride and accomplishment for this region and the entire country,” he said.

Not only is CCLEX seen to reduce traffic and make traveling more convenient but will spur much increased trade activities and open greater economic opportunities for Cebu and the rest of the Visayas region.

“The significance of the moment is expressed in a marvelous engineering way, stitching the remaining gap between the CCLEX’s Tower 1 deck with Tower 2 deck – pointing to the Project’s much larger role in finally linking the quaint town of Cordova in Mactan Island to the highly urbanized Cebu City in the mainland,” Franco pointed out.

CCLEX is the  P30-billion project of Metro Pacific Tollways Corporation’s (MPTC), and is the toll road project outside Luzon.

CCLEX is a project of Cebu Cordova Link Expressway Corporation, in partnership with the local government units of Cebu City and Municipality of Cordova.

CCLEX, which the third link to Mactan Island from Cordova to mainland Cebu through Cebu City’s South Road Properties. It has a design speed of 80 kilometers per hour (kph) and it is built with a navigational clearance or height of 51 meters –allowing large vessels to pass safely underneath the bridge.

Closing the deck’s final segment required precise execution: The two decks must be tightened securely at their final level of elevation, with just the right process of re-

stressing the required cables and propping them up at their ultimate position according to the intricate engineering design. This meant blocking the decks with rails and props to avoid any movement during and after concreting works, according to Allan G. Alfon, CCLEC president and general manager.

“After today’s main bridge deck connection, we look forward to another milestone: Opening CCLEX to the public for commercial operations in the first quarter of 2022. We can’t wait to see Cebuanos enjoy the ultimate expressway experience afforded by using this bridge,” Alfon said. The 8.5-kilometer CCLEX will be using a full electronic toll collection system.

The main bridge’s two towers are  “vessel collision proof,” while its back spans are equipped with multidirectional bearings, six on Cordova side and six on Cebu City side. These are energy-absorbing equipment to assure structural safety and stability during earthquakes.

Atop the two towers are eight 40-meter crosses, that were earlier blessed and lit up last April 15 this year timed with the the celebration of the 500th anniversary of Christianity in the country.

MPTC and CCLEC officials acknowledged the collective effort and achievement of hundreds of skilled foreign and local builders behind the construction of the main bridge amidst great work challenges. Among these odds  were working at heights in the middle of the Mactan Channel with ongoing marine traffic and following stringent health and safety protocols while the Covid-19 pandemic was (and still is) raging.

CCLEC is a wholly owned subsidiary of MPTC, the toll road arm of Metro Pacific Investments Corporation (MPIC), a publicly listed infrastructure holding company and a member of the MVP Group of Companies.

MPTC is the largest toll road concessionaire and operator in the Philippines, whose expansion goals include establishing toll operations in the Visayas, other parts of the Philippines, and in neighboring countries notably Vietnam, and Indonesia.