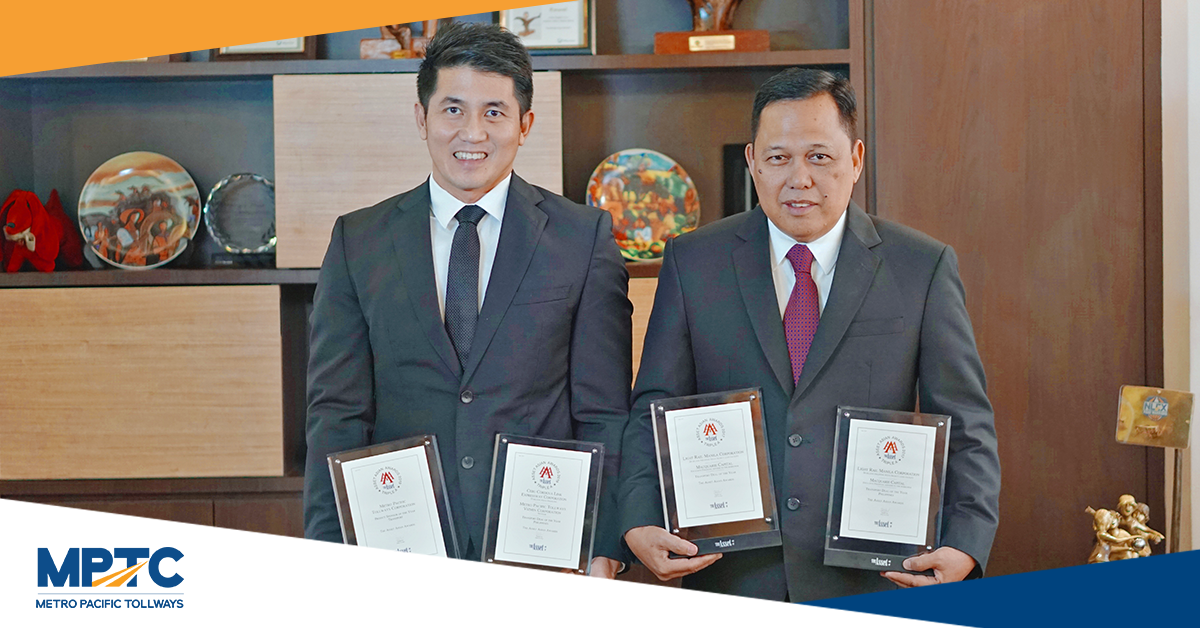 Movers and shakers in  the global market have thought of making a powerful statement about game-changing financing deals, and thus draw attention to the crucial role of bankrolling huge projects that otherwise would not take off at all.

The Hong Kong-based Asset Magazine, known for its authoritative coverage and independent research of Asia’s financial services sector, has conceived the annual Triple A Infrastructure Awards to recognize companies and individuals who have excelled in their fields.

A number of Philippine corporates and financial institutions have been recognized for these Awards in the past, but only when the Metro Pacific Tollways Corp. harvested four top awards—the highest number so far for a single year—did the Awards make headlines here in the Philippines and the rest of the region.

MPTC, the developer and operator of the longest network of quality expressways in the Philippines, won the “Project Sponsor of the Year” award for 2019 for the transport sector under the institutional awards category.

MPTC president and CEO Rodrigo E. Franco, on being the Project Sponsor of the Year, said: “This award all the more underscores shareholder belief and commitment in all our cited infrastructure projects.”

Christopher Daniel Lizo, MPTC chief finance officer, noted the significance of the awards, saying: “Given the difficult financing environment in 2018, the financing transactions related to these infrastructure projects are proof of the lenders’ solid support.”

The PPP Deal of the Year was given to the Cavite Laguna Expressway (CALAX) after the successful closing of the P24.2-billion omnibus loan and security facility, arranged by a consortium of banks for MPTC subsidiary MPCALA Holdings.

The Transport Deal of the Year went to the P19 billion financing for the Cebu Cordova Link Expressway (CCLEX), also sponsored by MPTC. When completed, the 8.5-km toll bridge project will connect Cebu City environs with Mactan Island, making it a major transport enabler for Cebu and the Visayas region. The Transport Deal of the Year-Highly Commended recognition went to another MPTC-sponsored deal that closed the P16.2-billion loan facility to support the enhancement and capacity expansion works along the Cavite Expressway (CAVITEX).

Making headlines is just the sidelight of MPTC companies that are quietly building roadways in the Philippines—then in the ASEAN. This is the business that the tollways group does best—improve people’s mobility, enhance their quality of life, grow communities—and build a nation—one nation at a time. “Today the Philippines, tomorrow the rest of the ASEAN,” MPTC’s Franco  said.

MPTC unit to bid for 2 road deals in Thailand